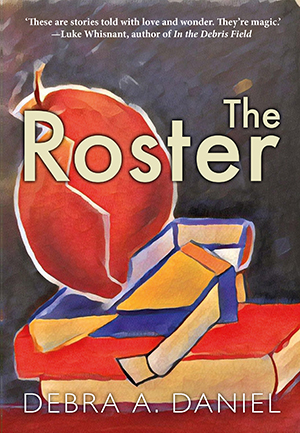 An ‘ensemble cast’ novella with a fresh and original concept — a sequence of stories about a teacher’s pupils at a school. The students’ eccentricities, rebelliousness and vulnerabilities are depicted with warmth, fondness, and very often, an absolutely heart-breaking poignancy, as in the case of the child with brittle bones, or the young boy grieving his sister. There is black humour too, in places, and endings that are intensely lyrical. The characterisations are superbly individualised, vivid, inventive and memorable, and are written with beautiful variety of expression. A novella of immense charm that has real emotional substance.
—Michael Loveday, author of Three Men on the Edge

Early on, one of Debra Daniel’s wonderfully eccentric characters says, ‘Don’t try to figure out how it’s done. Just let it be magic.’ That turns out to be good advice. The Roster magically evokes the multifarious milieu of the school playground and the early-grade classroom. It’s filled with quirky and unforgettable characters—hyperactive twins, a boy with Tourette, a brittle-boned girl confined to a cart—all beautifully rendered through the wise eyes of a primary school teacher. These are stories told with love and wonder. They’re magic.
—Luke Whisnant, author of In the Debris Field